Antennae, air horns, cable sets, coverings and various tachographs – even the roof of a MAN TGX driver’s cab can be individually designed ex works through a variety of options. This range is manifested in the prepacking process at the parent plant in Munich through long rows of shelves with around 250 different parts which are assembled on the picking cart one at a time for each vehicle order. Due to the layout of times, this storage area became known as the “supermarket” at MAN.

Until a few years ago, work in the supermarket was only carried out with paper lists. “The eight employees assigned with this task had to have excellent knowledge of the individual items throughout the entire storage facility”, says Franz Blaschke, who is responsible for process planning and maintenance in driver’s cab assembly for heavy trucks at MAN Nutzfahrzeuge AG.
Training new staff was very time-consuming, usually taking several months. Furthermore, errors which were only apparent later on in assembly could not always be prevented. It was in this context that Blaschke and his team was looking for a new picking solution that would support the staff by means of clear guidance.
After having searched thoroughly through the range of picking systems on offer, MAN decided on a light-guided Pick by Light application, PbL for short. “With PbL, employees have their hands free and can focus entirely on their work. The display mounted to the shelves are unambiguous and result in a minimal error rate”, says Blaschke. 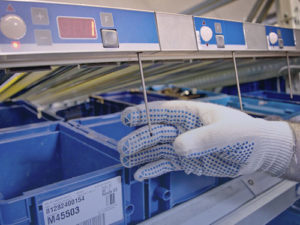 In direct comparison with other PbL suppliers, the product “PickTerm QuickReply” was able to come out on top. In addition to the stated preferences for PbL, the KBS solution has easily replaceable and convertible displays with a switch developed by KBS themselves for quick acknowledgement of orders. This “swipe trigger” means that the other confirmation button on the display does not have to be operated, thus increasing picking performance. The spring-loaded lever is “flicked” when the item is picked by the picker and thus triggered without any additional handling.

“With three exceptions, in principle only one item has to be picked from one compartment, meaning that the contact can never be triggered too early”, explained Blaschke. As a result, displays with elastic actuator lever to wipe were sufficient in the manufacturer’s warehouse. Only the three compartments mentioned from which generally several parts have to be taken have a corresponding quantity display panel. “The swipe triggers are the ideal solution for us”, says Blaschke, who had also considered motion detectors over the course of the project. “However, sensors would have been too unreliable due to the use of gloves”, says the industrial engineer.

Up to two employees work in the “parts supermarket” at the same time. Colour differentiation of the light signals was also necessary as a result. The colours red and green were selected from the seven colours available within the KBS solution. A special rule applies to compartments which, during the picking process, have to be picked by both employees working in the supermarket. “These compartments flash in the colour of the picking order triggered first”, explained Blaschke.

On the second passage to these compartments, another exception comes into effect. In this case, the order has to be acknowledged with the traditional switch – ultimately the sensitive “swipe trigger” can only be active once to prevent accidental acknowledgement by the previous employee. The employee concerned is informed of this special case by one of the two small illuminated arrows on the display. Each display has two illuminated arrows for this purpose which point to the respective switch.
Using these measures, errors can be virtually excluded – the investment has already paid itself off. According to Blaschke, “We now work faster and with higher quality”. Moreover, new employees can be trained within half an hour.

Changes in the weekly cycle

The second considerable benefit of the displays has also contributed to our economic success. With “snap-in adaptation”, the displays can be snapped onto the support profiles fixed onto the shelves and are supplied with energy and signals via a contact strip. The individual displays in the database are also linked to item numbers – and not to the shelf position. The main advantage of this construction is that the display elements can be placed elsewhere, as required, quickly and without the need for tools. “Our warehouse supervisor can do this independently and cost-effectively without external assistance” reported Blaschke.
The system’s design is adapted and improved almost every week – either due to new items or to experience within the process of continuous improvement (CIP). Since the system was commissioned, MAN is said to have increased the system’s productivity by approximately another 10 percent.

If you require further high-resolution images on the report please send an e-mail to marketing@kbs-gmbh.de