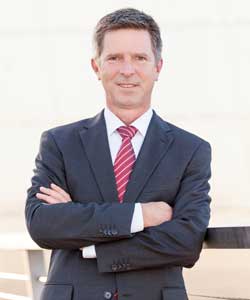 | Order picking: The process of finding and selecting products in a warehouse to fulfil customer orders. In theory a simple concept, but the reality is that it is often a complex and costly activity, and one which, if not conducted accurately and effectively, can heavily impact overall customer satisfaction. German engineering company KBS Industrieelektronik GmbH is a specialist in the design and manufacture of order picking systems, with a particular focus on Pick-by-Light technology, and provides top-class solutions to a broad range of high-profile clients around the world.

Located in Freiburg in southern Germany, KBS is one of Europe’s market leaders in the development, manufacture and installation of paperless picking systems. “Our systems are individually designed in close cooperation with our customers,” explains Sales Manager Michael Weiser. “We build practical solutions that decisively strengthen their competitive positioning.”

KBS’s specialty is Pick-by-Light technology, which uses compartment displays to give warehouse employees instructions at the point of selection; instead of a paper picklist, they receive instructions on the goods and volumes to be picked via an electronic display below each individual compartment.

Alongside the hardware – Pick-by-Light modules, interface units, control devices and picking carts – KBS provides complete software solutions, for example for material flow, order picking control, and SAP connection. “We are constantly developing new versions of our products,” Mr. Weiser points out. “In addition to the hardware, an important element of our service is the intelligent connection of the picking system to the customer’s own WMS or ERP system. Our in-house IT team undertakes this work; the range of these host systems is extremely diverse, but our technicians can, in principle, implement whatever the customer wants.” 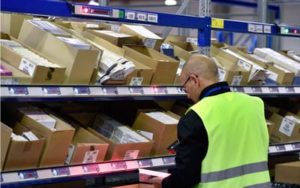 KBS Industrieelektronik`s speciality: Pick-by-Light technology in use in a logistic center

Although the company offers standard models, customized versions are developed and produced, even in small quantities, to meet specific customer requirements. Projects range from small systems with just a few storage compartment displays to vast installations with tens of thousands of compartment displays.

KBS boasts many big-name clients from, among others, the automotive, retail, and logistics industries. The Pick-by-Light system is the culmination of a long history in industrial automation which began in 1981 when KBS was founded by Wolfgang Klein, Joachim Beck and Wolfgang Schenk.

The three engineers initially developed and produced test systems for industrial customers, and the company became a leading force in the automation of testing systems. In 1993, KBS installed its first Pick-by-Light system. “At that time, this was driven by a switch box; today the intelligence is incorporated into the system itself,” Mr. Weiser underlines. “From this first system, we developed a whole series of products, which included increasing levels of display intelligence, and we also developed a separate BUS-system for communication.”

Mr. Weiser joined KBS in 2007 with significant experience in the electronics industry. “Following an apprenticeship in electrical engineering, I went into sales about 30 years ago and learned the business from scratch,” he says. In his view, KBS’s long history in automation technology is the foundation of the company’s success today. 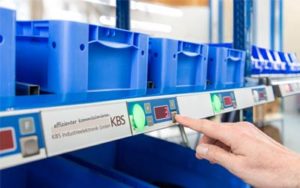 “The Pick-by-Light system was developed to an advanced level at a very early stage and quickly established itself,” he continues. “The picking process has evolved from the classic application – the mail order business – into many sectors. It is today used in every car production plant and every furniture factory. Our product has continually evolved. In 2002, we relaunched the system with a seven-colour light that offers various options and possibilities. In a further step, we divided the lamp so that we can now display seven colours twice.”

Up to 40% of KBS’s annual turnover – currently around ten million EUR – is generated through exports. While Europe has always been considered the company’s core market, KBS’s horizons have expanded alongside those of its customers. “Customers have become more international, which means we have too,” the Sales Manager explains. “When large automotive companies moved into China and the US, so did we. Today, we deliver to 42 countries around the world.”
Besides its competent, all-round advisory, design, production and installation service, KBS offers its customers complete system flexibility in that the compartment display can be simply clipped in place where it is needed. In contrast to most competitors who use plastic, the housing of KBS’s displays is made from aluminium which is robust and completely recyclable. The company also guarantees the availability of system components for a period of ten years.

How does Mr. Weiser see KBS’s future? “The three owners plan to remain true to their product, and take advantage of the opportunities and challenges that new technologies such as virtual reality and artificial intelligence bring,” he sums up. “We are currently working extensively with sensors and intervention detection. Picking systems are becoming increasingly mobile. Our core aim is to at least remain on the ball, pressing forward; ideally we will continue to be several steps ahead of the game.”

[PDF download of the article]        >> published online in European Business